A lot of parties has used Retro, Vintage 60’s, or the 80’s as their themes but I haven’t heard of that much with the 90’s. Well, as someone who came from that era or what they call a “Batang 90’s” (a Child of the 90’s), this indeed is the best decade for me. The music, lifestyle, games not to mention the TV sitcoms, movies- the 90’s was such a bountiful era.

Annually, our company conducts “Excellence Day”-a time to recognize the performing employees, meet the new faces, and just simply build camaraderie. I guess in my three years with the company, this is the first time that they used a theme (or probably strictly followed one) and us, the event committee, decided to use the famous/infamous 90’s. Probably also because most of us are of the same ages.

You can imagine it, mouths blabbering at the same time, noise (inaudible at some points) filling the room, laughter roaring from one person to another as ideas are thrown from here and there on how the program should go, what games, what to wear. I can’t help but smile at the very thought of that meeting. One word to describe it- NOSTALGIC.

And I’ve mentioned that word a lot of times when we discussed how we’d go along about it, even on the program itself being one of the hosts. Memories flashed as I remember Will Smith’s baggy clothes, Nirvana, Gwen Stefani, Backstreet Boys..god the list will never end! Of course, it’s not just the artist or the music itself but the story of my life behind it. How I discovered that I wanted to sing for a band and loathed being a balladeer, how my friends and I spent an afternoon after school, how my brother and I spent vacations over playing family computer- and not letting our dad use the controllers because his feet tend to fly everywhere the same time when Super Mario jumps. Haha! Life seems to be truly perfect back then, when I was young and everything seems to be handed on a silver plate but being the rebel that I am, just didn’t want to take them all in.

During the program, I asked my co-host what her fondest memory of the 90′ s is which she answered but to which I can’t remember now because she threw me back the question and my mind went completely blank. There are just so many beautiful memories of that time. I wasn’t prepared to answer haha! But now that I’ve thought of it, I realized my dearest memory was how nerdy I was and looked differently with how I look now. Yes, you can tell, we didn’t make a script, we just followed the program and threw adlibs every now and then. Instead of a script, we just agreed to use our own personalities the way people know us and spiced up a bit. I played the Valley girl and she’s the laid back typical 90’s kid. As I talk English in that distinctive accent, she spoke bluntly and sometimes tactlessly but still funny. God, she was so good at it. Good thing, people are used to us like that and welcomed us just fine.

All in all, it was a GREAT event. I’ve wanted to make a long post about it since the time it ended on the morning of July 13, but all I can say then was “Good job”. They were the two words that best explained how everyone dressed and brought back 90’s personalities to life, participated in games, revived that 90’s vibe. More than the prices, all the lovely things that catered to our visuals, I’m sure more than everything, everyone was touched, had fun and went down the memory lane with us. And seeing people leaving with smiles on their faces just made all the hard work worth it. 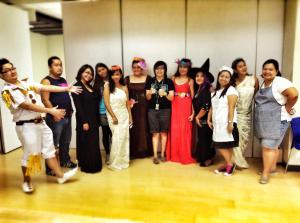 What are your thoughts? ♥ Cancel reply

This site uses Akismet to reduce spam. Learn how your comment data is processed.

Miss Mars is a seasoned host & eventologist, and a master trainer & coach. She tells stories for brands and people, and empowers them to find their voice. As a sucker for arts, she wishes to get hired for culture research and roam around the world. She can talk and interact for hours but can get very serious in getting quiet time with her wine and thoughts. At most occasions she goes off with Juneaue, as they fight for justice with her lasso of truth.